A Little Less Should, a Little More Rum

It's Wednesday. No rain, just chills and wind and curdled clouds. I should be mowing the lawn. Or something.

I should do the kids' laundry so Jade won't have to crouch naked at the top of the stairs again screaming, 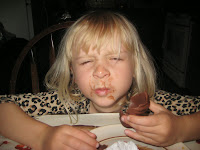 I should round up and capture all the dust elephants under my bed so I don't have another asthma attack tonight.

I should mix the dough for Hallowe'en cookies because it has to sit in the fridge for four hours before I can let the kids attack it with rolling pins and cookie cutters.

I should clean out the drawer from hell that caused D to curse and violently slam it shut when he was trying to find one elastic band.

I should write a blog article.

Oh wait, I AM writing a blog article. That makes one "should" out of five, which isn't bad considering I've spent most of the morning slumped on the couch playing online Scrabble and sipping a hot rum toddy. Mumma feels like she's getting a chest cold, and that does not make Mumma happy, or motivated, or overly concerned with her ever-present to-do list. Ever have one of those days when the "shoulds" creep up and try to strangle you? Screw the shoulds. Today I love the couch.

Anyone who spends most of their time looking after an active family knows the danger of forgetting to look after themselves. A couple of weeks of that stupidity and you simply collapse. After surviving several unsavoury health issues, I've come to recognize and listen to the messages my body sends me. Today, it was the sensation of having an invisible thirty pound cat sitting on my chest that made me stop doing the dishes and retreat to the sanctuary of my couch. I've essential oiled myself, turned the fireplace on, and concocted my tried and true "I feel like crap" remedy: hot water, lemon juice, raw honey, sliced ginger, a splash of rum and a cinnamon stick. Damn, is it good. It makes the invisible cat feel lighter with each swallow, and sends my should list back to where it belongs: in the drawer from hell.

UPDATE: 2 p.m.
I just watched the Walking Dead episode where a character gets a little tickle in her throat, which becomes a nagging cough, which then makes her cough up blood and die and become a zombie. If I start bleeding out my eyes, I know the rum just isn't cutting it.
Posted by Kimber at 12:06 2 comments: