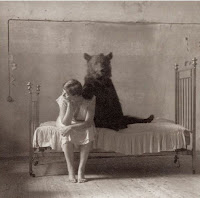 Yowzer, that was one vicious (and viscous!) flu bug. It took D down, and that man is never sick. I'm a wuss when it comes to being ill, but when he stays home from work, you know it's gotta be bad.

All that being off work & laying around moaning did give me a chance to reflect on some of the advantages of being sick, though. Cuz there are advantages to almost every situation, if one is willing to dig through the muck and find them.

1) Unlimited sleep.
Everyone knows that the cardinal rule when you've got the flu is to REST. But it's hard to slow down and take time out when the household screams to be looked after, your inbox is overflowing and your co-workers are on vacay. Luckily, the flu takes one look at your pasty complexion and says, "Oh, you're supposed to go to Yoga tonight? Nuh-uh. You wanna login to just one conference call? Think again. Feel like you should do up those dishes and scrub that mashed banana off the wall? Forget it kid. Now lay down and shut up." So you crawl up the stairs and fall into bed and sleep for 4 hours straight. And, cramps and nausea aside, it's heavenly.

2) MIL to the rescue
Those of you who read this blog regularly will know I extoll the many virtues of my saintly mother in law. She shines her brightest when D or I are ill; she swoops in with ginger ale and soup, whisks the kids over to her place and refuses to give them back unless we really beg. D and I are capable adults and good parents, but she is the master of all things maternal. Even though we sometimes feel guilty for letting her do so much for us, I know she thrives on it. Cuz who doesn't love to be needed? (Not to mention adored)

3) Unintentional Weight Loss
I've developed a really weird pot-belly over the winter. I'm not sure how I feel about it; I've always been thin, and having C-Dif made me too thin. So now I regard my pot-belly with equal parts confusion and admiration. My daughter likes to poke it, pat it and doze on it, proceeding to plunk her fluffy blonde head on my jiggly gut as though it were the softest of pillows. It wasn't until my neice asked me if I had a baby stowed away in there that I thought I should probably do something about it. But hey! The flu looked after Ms. PB for me. Thanks, flu. Now my daughter has to find somewhere else to rest that little head. I think my butt still has room...
Posted by Kimber at 11:32 1 comment:

Boo to the Flu

We have been pretty fortunate this winter so far - the kids have only had a few mild sniffle attacks, and we've managed to steer clear of the bronchitis, tonsillitis and c-dif that plagued our lives from November-January last year.

Dylan has croup, which I thought was a 19th century thing.

And now the dreaded "bum explosion" flu has arrived, and it's here with a vengeance. Dylan and I had it on the weekend, and now D and I have it full force. Jade seems to have escaped the worst of it, and only has a cough (I am touching wood vigorously right now!) so we shipped her off to Grandma's to be sequestered for the day.

Excercise - good for you, bad for your marriage

I don't believe in making New Year's resolutions. I like the New Year as it is: fresh and clean, with no mistakes in it. Why stain the shine of 2012 with forced incentives and promises I know I'll never keep? That's right, people: I am a New Year's scrooge. Give me the champers and the parties; keep your lousy resolutions to yourself.

Exercise, writing, not screaming at the kids, being outdoors more - these are things I strive to do no matter if it's January 1st or November 2nd. I have learned, however, that one's goals, no matter how inviting to others, are best attempted oneself.

Take exercising. D and I decided to attempt a twice-weekly, 30 minute workout that I ripped out of a magazine. I thought it would be fun if we did it together afer the kids went to bed. You know, turn on the hockey game, take off a few layers, get sweaty. As a couple. Kind of a workout-slash-foreplay sort of evening.

This, dear reader, is the result:

I wanted to kill him. And today I want to kill myself, I'm so sore. And I've learned an important lesson: couples that lounge together, stay together!
Posted by Kimber at 16:52 3 comments: 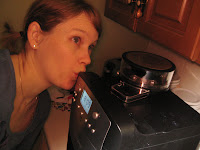 My newest purchase, delivered yesterday, sits on my counter winking a beautiful grey-blue eye at me. Moments ago, it growled like a small, angry groundhog and scared my kids. Then it began its slow, delightful trickling, filling my kitchen with a fierce and heady aroma.

The last time I splurged on a nearly pointless, ridiculously expensive purchase was in 2005. I'd just gotten divorced and had a bank account to myself for the first time in ten years. My sister had taken me out for some retail therapy and we both saw the coat at the same time.

It was a luxurious, turquoise Esprit hounds tooth coat, knee-length and beautifully fitted. I sidled up to it and surreptitiously checked the price tag. I think my eyes bulged like those cartoon dogs who see a really hot cartoon lady dog.

My sage sister shrugged. "Just try it on. You don't have to buy it or anything."

I tried it on.

The coat fit like the factory worker at Esprit had my measurements. The turquoise was shot with gold and dove grey thread. The buttons were leather. It had one of those belts at the back that I liken to the spoilers you see on sports cars: useless but sharp looking. I felt glamorous, rich, and happily single. I shelled out the money for that coat and I wore it for five years straight, until the robin's-egg-blue lining shredded and the buttons fell off. It's still hanging in an upstairs closet because neither D nor I can bear to get rid of it. "That coat does something to you," he told me the first time he saw me in it. And it did.

I'm not much of a shopper, online or otherwise. I don't like stuff, gadgets, etc. D rages at me because I don't buy nicer clothes, but honestly, I just can't be bothered. So it has been quite a while since I threw money at something I didn't truly need, just because something in me said, "GET IT."

Hence the Capresso coffee maker that's staring at me from across the kitchen. It has a built in grinder, a thermal carafe and a charcoal filter for my horrid water. I know it's spiritually damaging to love an object, and that spending as much as I did on a coffee maker is obscene, but you know what? I. Don't. Care.

My old coffee maker was on sale at Canadian Tire and I bought it because a friend of mine had one and it looked cool. But the damned thing LEAKED everywhere, all the time, seemingly seconds after the 1 year warranty expired. Plus it never brewed the coffee to the proper, paint-peeling strength that I preferred. In a caffeine-deprived fog, I went online, researched coffee makers and ordered the best of the best.

When my postie brought the giant box with my name on it yesterday morning, I nearly kissed him, I was so excited. And I still am. Hopefully Mr. Capresso will be as delightful a purchase as my old coat was. Because it will likely be another five years until my next nearly pointless purchase.
Posted by Kimber at 08:16 4 comments:

Oh true and faithful readers of this ol' blog, I'm back.

I'm not back with a vengeance, or back to kick butt and take names or anything. But hey, fingers to keyboard and arse in chair are pretty impressive after having written barely a word apart from countless inane facebook status updates since the spring.

2011 was a tough friggin' year. Thanfully, it didn't kill me. It did, however, make my life miserable on a number of levels. It also made me appreciate my body, my health, my doctor, my kids, my husband, my extended family and - most surprisingly - my sanity. Which, I'm happy to report, is now intact and functioning at a near-normal 90% success rate.

So thanks to everyone who stuck by me, encouraged me and held my hand, both literally and through cyberspace, while I battled some nasty demons in body and soul.