My first instinct was to call this post "Yo bitches, I'm back!" You know, a catchy, gleeful, boo-YA! type of title since I've been out of action for so long. But it seemed a little too gangsta for some of my more gentle readers, not to mention the fact that I don't actually talk like that (except in my head). All I could think of instead was the voice of that little possessed girl from poltergeist: cute and a wee bit creepy.

Because when a blogger that I follow (and by "follow," I mean check in on when I'm bored) drops out of the blogosphere for no apparent reason, it is a little creepy. I tend to fret. Did they die? Did they lose both index fingers in a horrible keyboarding accident? Or did the activity of blogging just become so boring they threw up their hands in disgust and vowed never to post navel-gazing claptrap again?

F*** You Penguin, Zombie Guy and YayNayDay, all blogs that I enjoyed reading, have all gone the way of the dodo in the last few years, ceasing their entertaining posts without much, if any, explanation. Their disappearances left me feeling a bit bereft. Even though I didn't visit their blogs every day, dropping in to find no recent entries was like going over to a friend's place, hoping for a friendly chat, only to discover your friend won't answer the door. You just wanted to pop in and chat for a minute, dammit; where the heck did they go?

So if anyone out there has experienced a similar feeling of mild disappointment (or irritation) after arriving at Someday to find I haven't been posting since December, I do apologize. The truth is so banal that I'd rather tell you what didn't happen. As in:
- I did not break my leg skiing after winning the Canadian Butter Council's all-expenses paid trip to Banff.
- I was not arrested for participating in peaceful, naked protests on Parliament Hill.
- I have not gone all Honey Boo Boo on my kids and hired them out to toddler modelling circuits.
- I did not adopt a Vietmanese potbellied pig.
- I did not catch c-dif again. (THANK GOD)
- I was not swept away on a romantic month-long vacation to Japan, Kuai or Bora Bora. (sigh)

Okay, okay. Here's the truth:
- in early November, I pulled two muscles in my neck and became severely dehydrated playing my very first game of hockey, which led to a violent migraine, which led to 48 hours in bed. (I did score one goal though)
- Both kids contracted the flu, which led to a reocurrance of an anxiety disorder I thought I'd just said goodbye to.
- The anxiety triggered a month of wildly unpleasant bowel experiences, which resulted in a joint colonoscopy/endoscopy (or, as D put it, a "two-fer"), which resulted in a diagnoses of IBS, which is what I think doctors tell people like me when they find out we're not dying of colon cancer or cursed with colitis, but will be stuck for life with a cranky tummy and unpredictable bowels
- Enter medication, which my body decided to unceremoniously reject, leaving me in bed for over three weeks, unable to eat anything that didn't resemble broth or applesauce.
- Say hello to full-blown anxiety attacks, with an occasional smash of depression, which made me feel as though I'd fallen into a rather large, rather black hole that I couldn't seem to claw my way out of...

So, see? I've got reasons, people! I didn't just bugger off and decide blogging was for foodies, celebrity hounds and sarcastic moms. I was here, fretting about my own absence; I was here, writing poignant, moving blog posts in my head that I promptly forgot; I was here, wondering if you'd come back and knock on the door again. I'm so glad you did.

Just so you know, this blog was never intended to be about anxiety, depression or IBS, and it's not going to change now. There are so many other, more talented bloggers who capture these experiences in a much more graceful, succinct manner than I ever could. The Someday Diaries is just going to be about life at Someday, in all its crazy glory. 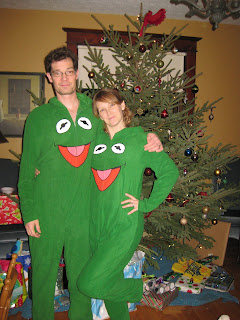 And I'm back to answer the door, even if I have to crawl over to do it.