Godzilla and the Garden 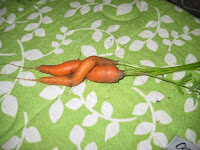 Gardening is a love-hate relationship. At the beginning of the season, I can't get enough of seeds and soil, weeds and watering cans. I sing while I dig and whistle when I plant. This all changes by mid-summer, when I start to curse all creatures with six legs, moan about weeds and lapse into a state of meh regarding anything with leaves.

There's a school of thought among the all-natural parenting population that says if you engage children in growing their own vegetables, said children might begin to put these vegetables in their mouths. Since my son Dylan does not eat any vegetables except potatoes and my daughter Jade has begun turning up her nose at all things green, I figured it was time to put this theory into practice. When my kids were destructive toddlers, I’d restricted their access to the gardens, making them wander around the borders or water daintily from the edges. No wonder they were disconnected from the food I tried to force them to eat. They thought gardening was a spectator sport.

One sunny spring day, we hopped in the car and drove to Country Depot to pick out seeds. Jade picked peas for herself and watermelon for Daddy. Dylan wanted a "beanstalk" so I bought him some scarlet runner beans, which can grow up to six feet tall. I chose lettuce, cucumbers and kale for myself, and threw in some carrot seeds for D. The lady at the counter said, "Wow, you must have a big garden!" and I smiled politely while mentally face-palming myself. Like eating at a buffet, our seed appetite was way bigger than our 12x40 foot garden stomach. I'd have to improvise.

Back home, we spent a productive afternoon hoeing rows and planting seeds while tree swallows swooped and serenaded us. The kids approached their tasks with the intensity of chess players, examining each seed before poking a careful hole in the ground.

This is good, I thought as my offspring got progressively grimier. This is one giant teachable moment about appreciating the earth. I sent the kids to fill their tiny watering cans so they could “give the garden a drink.” Sitting back on my heels to draw artistic labels on each garden stake, I smiled. This had gone better than I'd expected. In a few months, I’d be able to post photos of my darlings holding up their prize produce at the Ripley Fair. I was interrupted from this pleasant reverie by the shrieks of my daughter as she ran down the backyard slope, soaking wet and wailing incoherently. I sighed. My son would need some lessons on the art of watering.

The next morning, when Dylan fled the breakfast table and ran to the garden, I was thrilled. It was working! I'd captured his interest in growing food! Soon he'd be filling his plate with raw veggies and my husband would bow before me in awe. All for the price of a few seeds. Okay, a lot of seeds.

Jade and I followed Dylan down to the garden, where we found him not so much appreciating his earthly labours as furious that nothing had grown since yesterday.

"WHERE ARE MY BEANSTALKS?" he demanded, stomping through the freshly planted rows like Godzilla bearing down on Tokyo.

"AHHH!" I screamed. "GET OUT OF THE GARDEN! YOU'LL HURT THE PLANTS!"

"I can go get him," said Jade and began to chase Dylzilla through the garden like a pink version of Mothra, at which point I chased them both out with a rake. Before "GET OUT OF THE GARDEN" could become my summer refrain, I changed it to “WALK GENTLY IN THE GARDEN!” The irony was that my kids loved being in there and I hated that they couldn’t stay out. Never mind that there was a sandbox ten feet away; they preferred to plow through the garden like relentless little backhoes. Teachable moment, I reminded myself as I ground my teeth and helped my daughter repair yet another squashed row.

On top of the near-daily destruction, it was harder than I thought it would be to convince Jade and Dylan that the seeds were, in fact, growing. I YouTubed videos of seeds germinating. They were unconvinced. I acted out the life cycle of a plant. They rolled their eyes. Every day that they went to the garden and found it empty, their interest waned. What had I done to raise two such hardened skeptics? I talked about the magic of nature and preached patience. After seven days without so much as a sprout, when I started to sing my "Have Patience!" song, Jade snapped "Earth, air, water, sun, I KNOW MUMMA, I KNOW. But WHEN are they going to GROW???" I started asking myself the same question. Maybe the constant Godzilla reenactments had smushed our poor seedlings. It would be very difficult to refrain from screaming "I TOLD YOU SO!" at my kids, which was really not the teachable moment I’d been hoping for.

Then, finally, praise Gaia, it happened. The first crinkled pea shoots poked through the earth and the kids danced around, squealing with glee. "I told you so," I muttered under my breath, then smiled. Each day, something else popped up: beans fist-pumped the air with their tiny curled hands; a green mist of carrot tops appeared; cukes and melons stood upright, flaunting bow-tie leaves. The miracle of life had survived my children’s feet. Better yet, now that the kids could see the plants, they handled them with surprising gentleness.

After the initial surge of excitement over the appearance of our seedlings, Jade and Dylan started to lose interest again. I recognized the familiar signs of garden apathy. Instead of succumbing to it this time, I doubled my efforts to keep all three of us committed to our garden project. I coaxed (and sometime dragged) the kids down to help weed and water the fruits of our labour.

“I didn’t know gardening would be so much WORK,” moaned Jade, lugging her watering can around like it was filled with bricks.

“Funny,” I said as I raked, hoed and weeded, “I thought I was doing most of the work.”

Learning to garden means learning how to deal with failure. Since I had never been particularly adept at accepting my various horticultural fails, I wanted my kids to learn how to take things in stride and not get discouraged when things didn’t go as expected. This lesson repeated itself several times: we found all six tomato plants withered beyond recognition one morning, cause undetermined. Some kind of voracious bug devoured my kale and put huge holes in the cucumber vines. Half of the peas that Jade had planted didn’t sprout and Dylan accidentally uprooted one of his beanstalks during a weeding frenzy.

With the frustrations came the triumphs, though: handfuls of fresh peas eaten straight out of the pod (well, Dylan picked and Jade ate); a ridiculous bounty of beans and lettuce; cool, mutant carrots borne from improper thinning methods; dark green watermelon babies that lay heavy and content on the ends of their vines. The swallowtail caterpillar we discovered on one of our carrot tops was the crowning glory of our gardening experience. We took “Pippy” back to the house and tracked his transformation from a bright green eating and pooping machine to a dusty looking chrysalids, until one morning he emerged onto his stick, a velvet-winged butterfly. 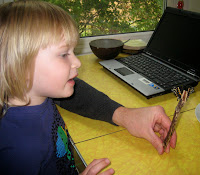 It’s September now, and our garden is getting yellow and droopy. It’s littered with black walnuts and chestnuts instead of vegetables, and the kids and I decided it was now okay to let the weeds do their thing. Jade still refuses to put a carrot anywhere near her mouth and although Dylan tried (and spat out) fresh beans and peas, he still screams in horror if anything resembling a vegetable lands on his plate. As an incentive to increase my kids’ veggie intake, the garden project was yet another fail in my agricultural and parenting history. But as a chance to hang out and get our hands dirty together, to share accomplishment and impatience and success and failure, to experience the communion of earth, sun, air and water? Major win, for Mumma and kiddies both.

Welcome Back to Someday! 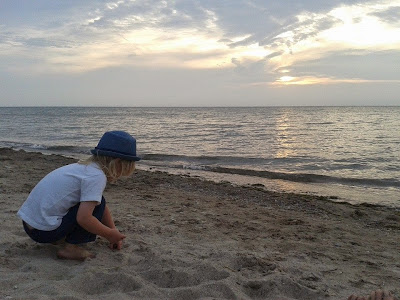 Phew, did that summer buzz by like a rabid bumblebee or what? Despite promising myself I'd make an extra effort to chill out and savour each day, June-July-August flowed into one another, a bright watercolour of beach and forest, meadow and park, lazy mornings and cricket-sung nights. It was a happy summer, and I'm going to tell you all about it. Soon.

Thanks for sticking around while we summered at Someday.
Posted by Kimber at 08:27 No comments: