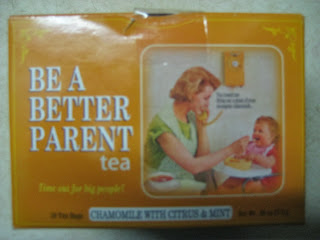 Sometimes (usually in the middle of the night after my son has crawled into my bed and is snoring two centimetres away from my ear), I think about all the freedom I had before I became a parent. I remember the glorious mornings of sleeping in, the nights full of pillow talk with D; going for motorbike rides or spur-of-the-moment ski trips; salsa dancing at the club till the wee hours; eating wine and popcorn for supper and to hell with dishes. And random naps. Oh, how I miss random naps. It's pretty wild to think about how much life has changed in nine short years.

As I made the kids' beds this morning, bleary-eyed from yet another night of broken sleep, I surveyed the happy wreckage of their room. I uncovered a layer of toy tractors under my son Dylan's comforter, and fought to find my daughter's pillows beneath a landslide of stuffed animals. A princess crown, a pair of flippers, sixteen stray blocks and a kaleidoscope were stuffed under Dylan's bed. Under Jade's I found her precious pink piñata from her birthday party last May and three pairs of crumpled pyjamas. Sitting on the edge of my daughter's bed to untangle the inside-out arms and legs from her PJs, it struck me just how empty my life would be without her and her brother in it. Which, considering I never wanted children for most of my adult life, is saying something.

In my experience, life with two kids under the age of five vacillates wildly between predictable routine and utter chaos. Most days, it's all about the cuddles and giggles and teachable moments. And then there are the days I want to run screaming down the lane and beg the first motorist to please give me a ride to ANYWHERE OTHER THAN HERE. I don't know if that's typical for most parents, but it's my normal. My kids are bright, hilarious, challenging, willful creatures who teach me every day how to be a mum, in good times and in bad.

I'm lucky, because thanks to school and day care and Grandma Lowry, I get lots of me-time every week to do the typical hausfrau stuff and write a bit, which preserves my sometimes tenuous hold on sanity. I'm aware that this is not typical, as most parents don't get the type of breaks from parenting that I do, let alone the opportunity to take a two-week break to an exotic locale sans children.

A few ladies from my Mom's Group got together last night for supper at the local Chinese place. We were celebrating an early Chinese New Year (aka making up an excuse to get out of the house and drink wine), and our conversation bubbled and swirled around a whirlpool of topics, punctuated with splashes of laughter. The stream of talk came to rest, briefly, on the subject of my younger sister, Tanzi. She's teaching at an international school in Bali for the next year, living in a glorious house with marble floors and a pool, learning to drive a motorbike and having supper at the beach every night. It's not all paradise, but it's a lot more exotic an experience than life in the Bruce is for any of us Moms.

"You should totally go!" one friend said, eyebrows raised.

"Of course you should!" chimed in another. "What a perfect opportunity to travel!"

"Well, I couldn't really take the kids," I began.

"Duh, of course not," said the first friend. "Go by yourself! They have an awesome Grandma to take care of them, they'll be fine." (Clearly, my mother-in-law's reputation is well-known.)

"But I'd have to go at least two weeks," I explained. "It's a 24 hour trip just to get there. I couldn't leave the kids for two weeks."

"Oh, yes you could," they assured me. One girl stabbed her finger on the page of the magazine another Mom had brought featuring our Chinese horoscopes, which we'd been reading aloud to each other. "Look, it says right here in your horoscope: 'World Travel.' You have to go!"

There are lots of people who travel with their kids to other countries outside of North America. Several of the women in my Mom's group have done it. I see photos on Facebook of parents in amazing locations with their kids and marvel at the sheer courage and fortitude it takes to pack and load up children, sit with them for hours on a plane, then have adventures together without the comfort of home and familiarity of routine. I applaud folks who do it - I think travel is magical for adults and kids alike. And I applaud equally loudly for the parents who leave their kids in someone else's capable hands and go on a vacation unencumbered by diapers and strollers. For a few days, maybe a week, it would be heaven.

Without a career ladder to climb, or even a regular job to clock into, my main focus when the kids are home is being Mummy. And I like it. On the days when I'm not writing (or trying to write) or volunteering at the school or being a hausfrau, and my children are at home, I don't try to pay the bills or blog or do anything that requires a lot of my attention. Those days are theirs, and as much as possible, they have my undivided attention to play, read, build, paint, bake, bathe, have dance parties, frolic in the snow, whatever. As much as my 25 year old self would recoil in horror, I often feel that I'm at my best when I'm with Jady and Dyl. I'm getting pretty good at this mothering thing, most of the time, even when I'm doing the not-so-fun stuff like wiping bums and getting barfed on at 3 a.m. It's more of an art than a science, and hey, I was an Arts major!

Right now, I don't need two weeks off, which is ironic because there's been plenty of eye-rolling on my part when D tells me he can't afford to take time off work on a certain day or week. But now I get it. Bali would be cool; I just can't afford to take the two weeks off from my kids' lives right now. Their crazy little siren songs are too strong. 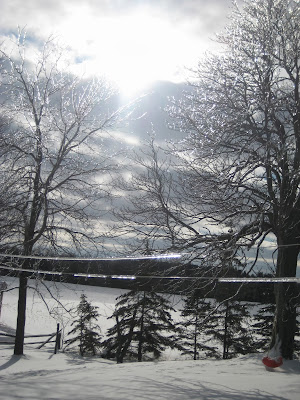 This morning, after shuffling Jade down the lane and onto the bus for the first time in three weeks, I did something sneaky. Once Dylan was absorbed in his BBC kids' show, I tiptoed outside and sat on the back stoop with a hot cup of coffee, flavoured with the last of the eggnog. The air smelled fresh and melty, instead of frigid and manure-y like it did last night. Breathing it in gave me more satisfaction than even that first sip of coffee. I watched a cloud of finches burst into the air and settle with a chorus of chirrups in the naked branches of our red maple. An irate blue jay soon scattered them, but they whooshed their way onto the black walnut tree instead in a cheerful, fluttering rush. I could hear a distant snow plow scraping its way along our road, but other than that and the chatter of finches, there was delicious stillness. Then faintly, I could hear a voice through the open kitchen window hollering the one word with the power to shatter any zen moment: "MUUUUUUUUMMMMMMMMYYYYYYYY!?"

It was five minutes of solitude at the most, in weather that's finally warm enough to pause in without six layers of protective clothing, but it was all I needed to give me the poke in the brain I've been waiting for: it's time to write again.

We've been housebound since Sunday, thanks to the "arctic vortex" that descended on most of our area over the past week, bringing nose-hair-freezing, bone-cracking temperatures and wind that slices through you like a samurai sword. You know it's bloody cold when a winter lovin' gal like me starts to shiver in her snow pants. And before the deep freeze, we had my sister and nephew's arrival from Australia to celebrate, the my other sister's arrival from balmy Bali, then a wave of sickness at Someday which postponed Christmas to Boxing Day. Throw in a few Lowry Christmas celebrations, travelling to and from my Dad's cabin, New Year's, one sister's departure and enough laundry to choke an industrial washing machine, and life was full to the brim of…well, life.

Not that I'm complaining, or making excuses. I just decided that it was time for a sabbatical from writing. After all the edits and drafts and proofreads and reorgs of my book, I'd had enough. When I played Candy Crush or pretended to be a kitty for sale for my daughter's enjoyment or sat on the couch and read a pile of books under D's disapproving eye, I was conscious of my blog and my notebook and my new purple pen staring at me balefully. "Yeah, you can wait," I told them, and refused to feel any guilt whatsoever. Instead of writing, I cooked soups and stews and baked biscotti and smartie cookies. The kids and I decorated the house to within an inch of its life. I hung out with my sisters and nephew, hurt my knee tobogganing, played "Coffee Monster" and tractors and Sneaky Snacky Squirrel with the kids, re-read three of my favourite Game of Thrones volumes and uploaded a squillion photos onto Facebook. I didn't read any blogs, I didn't write any blogs, and I didn't care. The nice thing about being a writer (to me, anyway) is that even when you're not physically putting stuff down on paper, you can write stories in your head until finally there's no room left and they have to burst out onto the page.

This morning's five minutes of gorgeous, snowy peace reminded me that it's probably time to end the sabbatical and get back on the ol' writing horse again. I'm ready now. I've had a good rest, a very full winter of joys and irritations and the ideas are starting to leak out of my ears. Hopefully you're all still interested in hanging out with me at the Someday Diaries again.
Posted by Kimber at 09:22 4 comments: