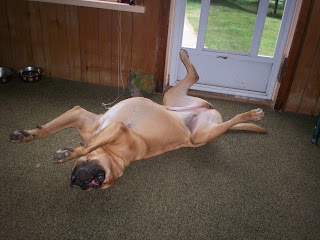 For those of you who haven't already heard, my big, sloppy, "I weigh 100lbs but still think I'm a lap-dog" bull mastiff died in December. Neko was riddled with doggie lymphoma, and I decided to send her "to the happy hunting grounds" three weeks after her diagnosis.

It's taken me a while to find the motivation to write this entry; anyone who has lost a pet will understand how tough it is to pay them proper tribute. I don't want to get maudlin over a dog, especially when there are terrible, horrifying things happening to human beings on the other side of the world right now. But she was a faithful, loving companion for over seven years, and I think she deserves some mention in my bloggy annals.

Neko belonged at first to my ex and me. I'd always wanted a dog that looked like a DOG - wee little canines afflicted with cute and/or fluffy need not apply, thank you very much. And after spending seven years with an irrepresible bull terrier, I wanted a dog with personality, but not TOO much personality.

We researched portuguese water dogs, ridgebacks, vizslas and weimeraners. Then we found a bull mastiff breeder in Mowhawk. She was such a nice person, and her dogs were friendly, well-behaved and healthy looking. When the breeder showed me into a pen that held 15 sleeping bull mastiff puppies, I knew I was in trouble. When they woke up and tumbled over en masse to climb all over me and shower me with puppy kisses, I was done for.

Neko was a singleton, the only puppy from her mother's first pregnancy. We lucked into getting her, as she had already been spoken for, but the people who'd been first in line backed out when they found out she was a tawny red instead of brindle. When we sat in the kitchen signing the paperwork that would make her ours, the breeder asked us what name we'd picked. I told her Neko, which was Japanese for cat (I was taking Japanese at the time), a little joke and also a nod to Neko Case, a
Canadian singer my ex and I admired. A minute later, the breeder's kitchen radio played a Neko Case song, which freaked us all out a little bit. Obviously, Neko was meant to be ours.

She was a rambunctious dog from the very beginning, chewing up her basket and anything else within teething range; as a puppy, she hated being held and lived only to wrestle with anyone who'd throw down from the time she woke up until the time she collapsed in a heap in her crate. As she grew into adulthood, she became more and more of a cuddle bunny, which was problematic since she ended up weighing only 20lbs less than I did. As a teenaged dog, Neko's favourite pasttime was leaning on people until they fell over, at which point she'd happily sit on them until they were rescued from her scary love.

She survived two knee surgeries, a bout with mange, a weird growth on her head and several skunk attacks. She also survived my bad divorce and subsequent anxiety attacks. I'm thankful she was with me through all that crap - she was a great companion, and a grounding presence for me to come home to. And when D came into my life, she lucked out as much as I did: he took her on epic walks through the city and spent hours giving her the endless belly scratching sessions she so craved.

Our move to the country was probably the best thing to happen to her. I felt such a surge of joy whenever I saw her gallop along the beach, run blindly through the long grass in the meadow, or fjord the depths of the Pine river behind our property. Nekes spent long, lazy days stretched out in a variety of sunny spots, often taking refuge from the heat under the mock orange shrubs, where she'd finish off her nap with a back scratch from the low-hanging branches. The city dog transitioned to country dog without a backward glance.

I admit that since Jade came along, Neko didn't get the attention or exercise she used to. But she had slowed down considerably as well; whether that was due to age, having adapted to our new lifestyle or the cancer's inexorable advance, I'm not sure. She got growly and miserable at the end, and that's why I decided it was time to give her some peace. Owning a dog is a huge responsibility, the hardest part of which is knowing when it's time to let them go, and preventing unnecessary suffering.

The vets came to our place so Neko could pass out of this world in the comfort of her own home, on her own stinky bed. Watching her eyes glaze over, seeing her take her last breaths, knowing she wouldn't be there to rub up against me and cover me with hair anymore - it was pretty awful. Awful, and necessary.

So we have started a dog-less era here at Someday farm. D isn't in a hurry to add any more furry friends to our family, and I want some time to grieve Neko before I even think about another dog curling up in my heart again. It's the first time in 14 years that I haven't had a canine friend shuffle to the door to welcome me home; the first time in a long time D and I haven't had a constant companion tugging us along on our walks. But the most poignant stab came a few days after Neko's death, when Jade threw a handful of food on the floor, looked around, and asked "Where Keko?"