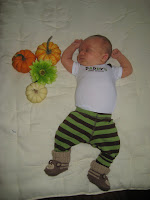 I don’t know if it’s a farmer thing, a country thing, or just one of his lovely little quirks, but around the first week of July, my husband looks out the window with a mournful sigh and says, “Well, Kimmy, summer’s almost over.”
We were zooming down a concession road the first time I heard my husband say this. It was a glorious sunny day; the wheat was yellow, the sky was blue, the trees were green. I looked at him suspiciously. “Are you nuts? Summer’s barely begun!”
Another big sigh from my man. “Look at that field over there.” I looked. The wheat rippled under the unseen hand of the wind. “When the wheat begins to turn gold, that’s how you know summer’s almost over.”

At the time, I thought my husband was pulling my city girl leg, so I rolled my eyes and ignored him. But after hearing this doleful mantra every July for the past five years, I’ve come to accept the fact that the seasons really do change a little differently up here in the country.

I looked out the window the other day and realized with some surprise that not only was it autumn, but that autumn was already making way for the bluster of winter. When the heck did that happen?

Our newest addition, six-week-old Dylan, has a penchant for 3am partying. This has taken a toll on my ability to notice the world around me, let alone what's going on in the next room. I haven't taken in my solar lamps, dug up my garden or planted my bulbs; in fact, there aren't any leaves left on most of the trees and I don't even recall seeing them fall off. I feel a bit disappointed, because watching the seasons change is one of my favourite parts of living in the country.
During the ten years that I lived there, autumn announced its arrival in Waterloo by turning the giant sugar maple in my backyard a ravishing shade of scarlet. City gardens, once resplendent with their displays of frilly annuals, started to wither, and elaborate leafy wreaths began appearing on doorsteps. Even if I’d missed all these signs, getting stuck behind big yellow school buses on my way home from work was a dead giveaway that the season was changing.

Of course, trees turn colour and school buses zip by in the country, too. But somehow, up here there seem to be even more poignant signals that autumn has arrived. The lake loses its serene turquoise hue and becomes a fitful sapphire blue. Robins gobble every last orange berry off my ash tree, leaving it stark naked. Poplar trees shiver and show the bright white backsides of their leaves when chilly breezes tickle them. Squirrels from over the hill risk suicide to scamper across the road and steal corn, black walnuts and chestnuts from our place. And ads for fall fairs and country bazaars start popping up in the newspapers and on grocery store bulletin boards.

The arrival of cooler weather is always a relief to me, no matter where I'm living. This year I’m even more thankful to finally notice autumn has descended upon the Bruce after the unbearably hot summer I suffered through, heavily pregnant and busy chasing an exuberant sixteen month old. And with the return of cooler weather, I've experienced a renewed urge to cook slow, hot meals: borscht, chicken chili, tuscan bean and bacon stew, carrot and potato soup. There's something so cosy about chopping vegetables and concocting something steamy while looking out the kitchen window on a stark fall landscape. And it's immensely satisfying to hear my husband, that lover of summer and barbecues and hot weather, say "Kimmy, you make the best soup I've ever tasted." (That's right people: even better than his mother's! There is no higher cooking compliment, in my book.)

My bulbs may not get planted this year, and my garden gnomes and lanterns will likely taste a hint of frost before I find the time to safely stow them away in the garage, but Jade and I managed to get our pumpkins and 'mums in place just in time for Hallowe'en. And we've got a few more weeks to breathe in the crisp, leaf-scented air on our walks before winter knocks on our door with a frosty hand.
Summer might be over more quickly in the country, but the advantage is that I feel as though autumn envelops me completely. At Someday, I’m surrounded by the season instead of simply observing it through my windows. Well, I’m sure I’ll feel that way again next year when life isn’t a happy blur of nursing and diapers.
Posted by Kimber at 16:12

Well, then - some soup recipes, please!

Nice posting, Kimber and great photo of your wee (or not so wee) boy. xx

Hey Kim!
I too, cannot believe that summer is over and winter is on it's way.
It seems the older I get the faster the months fly by.
Take care.
Lois